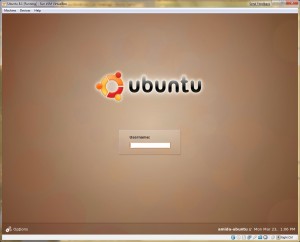 Now that I have a fast Core i7 machine, I wanted to try running multiple virtual machines on it. My first choice was the free Virtual PC 2007 from Microsoft. The guest OS of my choice is the popular open source Ubuntu. The combination was not ideal.

When I first tried to install Ubuntu 8.10 using Virtual PC 2007, I got stuck on a garbled screen. I found this page that solves the initial problem and other problems related to Ubuntu 8.10 on VPC 2007. After I finally got everthing working, I was not too happy about the performance even after I turned on hardware virtualization.

The other free virtualization software is Virtual Box. I decided to try it out. The support for Linux is excellent. I didn’t have any issues during installation and there is an add-on program which integrates the host and guest well. What amazes me the most is the performance. When I run Ubuntu under Virtual Box, it doesn’t slow down and the interface is very responsive. I don’t get the sluggish response that I usually get with emulation.

If you are like me who was not impressed by the performance of virtual machines, you might want to give it a second try with Virtual Box.