On friday, Apple CEO Steve Jobs announced the iPhone case giveaway to consumers to fix the “death grip” problem: the wireless signal is sometimes muffled because the user is holding the device with a bare hand. This dilemma has been voiced by many users ever since the phone’s release in the US three weeks ago. Despite the company’s denial of such a problem, their free issue of cases will apply to the more than three million people who have already purchased the phone, as well as new buyers through September 30. People who have previously bought a $29 Bumper case will be refunded.

They are also offering a full refund for the phone within thirty days of purchase (with no restocking fee) for unsatisfied users. 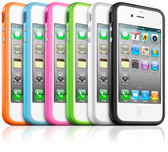