One reader has asked about some tutorials on how to tweak the tweaks. Here you are. I am going to show everyone how to add a program to the desktop. The program that I am going to add is called NoniGPSPlot. The web site is here. You can find a lot of useful information like tutorials and manual from the site. NoniGPSPlot is freeware, but if you find it useful and use it often, please donate to the author to help with future development.

The program I use to create the desktops is called SystemInformation. The web site is here. The site is in German, therefore you’ll need to use some translation tools to view the pages in English. SystemInformation uses a series of INI files for desktop configurations. In this release, most of the INI files are kept in Script/desktop folder on the storage card. There are 3 INI files: main.ini, games.ini and utilities.ini. Each is responsible for a desktop. In this example, we want to add the program to the main desktop, so we will only concentrate on main.ini file.

Now let’s begin. First, download this zip file from here. Unzip the file and find a folder called NoniGPSPlot. Insert your SD card to the card reader connected to your computer. Copy the whole directory to Script/programs on the storage (SD) card. In the past, I put everything under Script directory. As we have more and more programs, I like to organize the programs and put them in a separate folder. After copying, the directory structure is like Script/programs/NoniGPSPlot . Inside the directory, there is an icon file gpsplot.ico . Copy this icon file to Script/desktop/icons folder.

Now that we have the files ready, we can start editing main.ini. Use your favorite text editor and open main.ini in the Script/desktop directory. We want to put this program next to the uBook program. There is a commented out section about this.

Uncomment this section by removing the # from the beginning of each line. We also need to edit the variables Command, IconNormal and IconPushed. Modify the section so that it’s like the following.

Note that we use absolute path for Command, but use relative path for IconNormal and IconPushed. This is necessary for the SystemInformation32.exe to work.

When you are done editing. Save the file. Before you remove the SD card from the card reader, you can test it first. There is a program called SystemInformation32.exe in Script\desktop directory. Double click on the program to run it. Here is the screenshot. 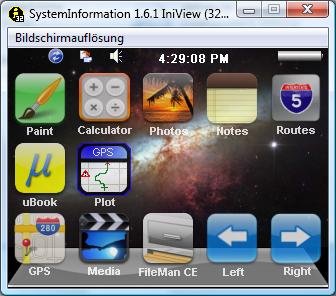 It looks fine and you can remove the SD card and insert it back to your Mio C230. Soft reboot(restart) your unit to see the changes. Now that you know how to add a program to the desktop, I suggest you don’t do it just yet. In my next tutorial, I am going to show you how to add another desktop. It’s better to do your customization on a separate desktop. That way, when the next release is out, you won’t lose your modifications.