Some users came to me because their Macbooks crashed, and there was a message shown on the screen: You need to restart your computer. Hold down the Power button for several seconds or press the Restart button. They tried the steps as suggested by the message and restarted their computer. However, they still ran into the same problem.

This message indicates a kernel panic condition. This may be caused by corrupted system files or hardware failure. Oftentimes, it is only a glitch. A simple restart may fix the problem. However, the aforementioned users had tried to restart the system, but it still didn’t work. I tried to boot the computers to target mode to get some important files off of the laptops, and the Macbooks did not boot to target mode. Instead, they booted normally. Problem solved.

If this does not solve your problem, Apple has a help article about this issue. The suggested options are to: 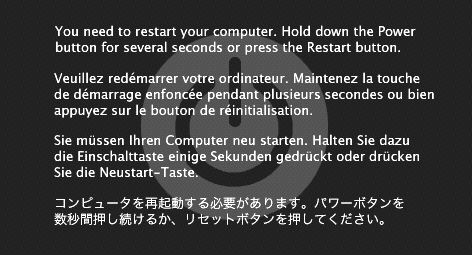